Hey kids! Today we have yet another surprise for you. Let’s meet another friend on Halloween. This time it’s a bat!

First we need to take 4 balls of PlayDoh. 2 big ones , both grey and black, and 2 small ones, white and red respectively.  Now take the grey ball and pull enough Play Doh out to make a smaller and more rounder ball from it. Take the black Playdoh and do the same, except the ball you cut out from it should be smaller.  Now take a little bit of the white clay and make two tiny balls from them. Take the black playdoh and make even tinier balls from them. You can see that we’re making our bats eyes! Take some more red playdoh and make a small red ball as well. Now we are going to take the big play dough ball from before and put together the face of our friendly bat. Look at it’s wide eyes and that cute red nose. Uncle Sudheer also wants you to take some more red playdoh and put a big smile on our bats face. Take a few more pieces of white clay and use a screwdriver to make small fangs to be placed right under its bright red smile. And we are done with the head of our Halloween bat!

Now let us move to the torso. Attach the Torso to the head with a toothpick. Use the toothpick to then carve out two legs for our bat with small black play-doh balls. Attach these to the main torso. Now take two big blocks of black playdoh . Flatten it out properly and start carving out wings from them. First make the outline on the surface and then cut it out with a screwdriver. Use this wing to trace the other wing on another block of flattened black playdoh so that both wings are of the same size. Look how pretty those wings look. But we’re not done yet. Take some red playdough and roll some thin strands of clay from them. We are going to use these to decorate the edges of the wings and get them ready for Halloween. Once you’re done decorating the wings in the way Uncle Sudheer just showed you, you can attach them on both sides of the torso with toothpicks. We’re almost done! We’re going to take two black balls and two red balls and carve out pretty ears and ear holes for our bat. And look! Our friendly halloween bat is here now! 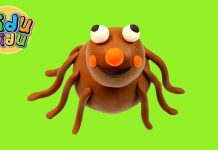 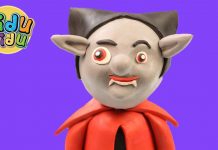 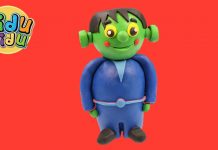 Learn How to Make Halloween Baby Frankenstein with Play Dough

ABOUT US
kidukidu.com offers organic learning education for preschool kids through Online. It aims to improve their creativity, communication skills and motor activities. Many tool crafts such as modeling playdough (play doh), Alphabet making crafts, toys making, nursery rhyme songs and painting, story telling, acting , dancing, magic brain teasers and the like are used here. Moreover we offer creative workshop & online games for your toddlers and preschoolers. Subscribe to our You Tube channel to get notified on our latest content.
Contact us: kidukidu@invis.in
FOLLOW US
© Invis Multimedia Pvt. Ltd. All rights reserved.
MORE STORIES